Converse's Weapon EVO is live and ready for you...what are you waiting for? Go ahead choose your Weapon and get out there and play basketball like your life depended on it.

Below is the press release from Converse and a picture of the White/Black/Red colorway of the Weapon. However, for more pictures and even videos you need to take your internet loving self over here. 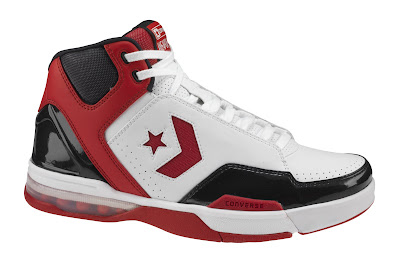 I'm going to be in Pigeon Forge, TN the rest of week....by the way that would be a great place for Converse Store....so there may or may not be a Friday Flashback this week.  You'll just have to come back and check it out for yourself.

Probably won't come out in the UK as usual. This country is so retarded when it comes to B Ball kicks God damnit!!!!!!!! >:-(

I have two pairs of these now. The Celtics Energy colorway, and the regular Celtics team colorway. Great shoe!

Yeah got the black/white regular celtics colourway week or so ago... and thats here in australia... cheap too... better than jordan 21 and not as stupid expensive
great shoe! now to wait for the real lakers colourway

I'm heading out to FL in March, hoping to pick up a couple pairs for myself and my son too.
Such a long wait though, boo :)
Hopefully we'll see a lot of these in the league when the new season kicks off next week :)