Well the 2008-09 season is officially over and for the 15th time the Lakers are champions. Congratulations are in order for the fantastic job that the Lakers and Magic did in getting to the finals. While I was for the Magic, I am still just thrilled that Cleveland didn't win. However, the NBA wasn't the only basketball going on over the last few days. Besides the WNBA, the Kentucky and Indiana All Stars took the floor for their annual two game series.

The boys from the Hoosier state won both games but by all accounts it was a great weekend of All Star basketball. Below are three pictures from the game. As you will notice the Kentucky All Stars wore the Converse Wade Slash, which is why they're getting some love from The Converse Blog.

Below from AP Photo/Michael Conroy, Kentucky's Seth Faulkner and Corey Wildford are going for a loose ball. 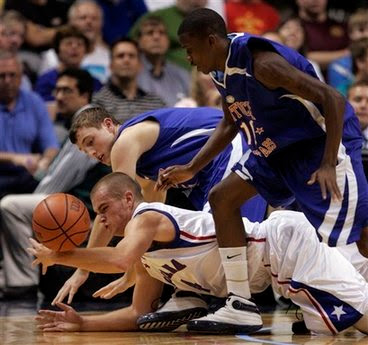 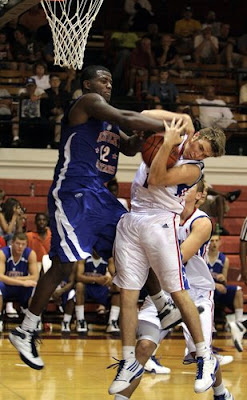 That's it for today, thanks for checking out the blog and voting in the poll.  Check us out at Twitter too!
Posted by James Martin at 11:32 AM