The Converse Blog: Converse and Target sitting in a tree, k-i-s-s-i-n-g....

Since I've posted last a couple of interesting Converse related items have taken place. Marquette made it to the finals of the Maui, but lost to Duke. Western Kentucky played a big game against Gonzaga last night, but came up just short. Maurice Evans got traded to the Magic, which means no more Laker colorways, for now anyway. What also sucks about this trade is it's one less team that has a Converse guy, now the Magic, Heat, and 76ers both have two. Also a new set of ads started rolling out, but I'll talk more about those on Monday.

What I want to touch on today, Black Friday, is the new relationship between Converse and Target. 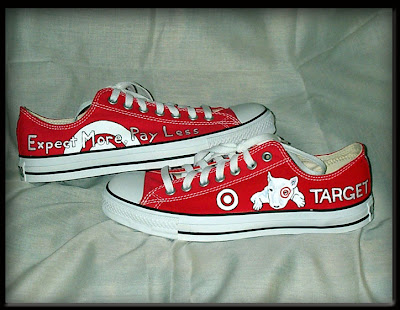 While I am not talking about these custom designed Chucks, you can go here to find many more at Punk Your Chucks. No, what I am going to talk about is the new partnership between Converse and Target. First so you know what the details are read the press release below in blue.
N. ANDOVER, Mass., Nov. 19 /PRNewswire/ -- Converse Inc. and Target Corporation have reached an innovative partnership agreement to offer One Star vintage inspired sport lifestyle apparel and footwear exclusively at Target stores nationwide beginning in February 2008. The One Star collection will be supported by an integrated marketing campaign. Select sportswear and footwear styles will also be available at Target.com.

"We are very excited about this tremendous partnership celebrating Converse's iconic One Star label with a world-class retail partner like Target. One Star has been a successful part of the Converse family for more than 30 years. This collaboration will enable us to deliver an innovative, premium head-to-toe lifestyle product collection while creating an exclusive One Star offering for Target guests," said Jack Boys, Chief Executive Officer, Converse Inc.

"We are thrilled to bring Converse One Star products exclusively to our guests in new and exciting ways, and we look forward to creating a unique in- store experience that embodies the One Star lifestyle," said Gregg Steinhafel, president of Target. "This partnership is another way in which we strive every day to bring our guests differentiated merchandise at a great value."

The One Star label made its debut in 1974 with a low cut, suede version of the original Converse basketball oxford with the iconic Converse five-point star design on its side. The One Star shoe quickly became a national phenomenon. It was adopted by the West Coast surf and skate scene of the 1970s and 1980s, and later by the grunge music scene of the 1990s, as a badge of honor -- a retro statement of their alternative and rebellious lifestyle.

One Star continues to be an influential part of Converse's rich heritage in sports and music as the Converse brand celebrates its centennial in 2008. One Star has been a successful franchise and has enjoyed strong international growth in recent years. Converse's partnership with Target will bring new energy to the One Star brand in the United States, introducing the iconic shoe to a new generation of consumers and Target guests. One Star will continue to be offered internationally through other retail partners. Converse's legendary Chuck Taylor All Star and other Converse footwear and apparel such as Dwyane Wade performance basketball product and Converse by John Varvatos men's and women's apparel will continue to be distributed in the United States and internationally through a broad range of retail channels.

Where to start....I've got to honest at first I wasn't really that happy to see this. Mainly because up until the other day, my feelings on Target were rather negative. I don't really have an explanation for my bitterness towards Target, and I actually hate Wal-Mart worse. That's when I realized it could be worse, what if this deal was with Wal-Mart? Don't get me wrong, I shop at Wal-Mart, but I'd rather not. Anyway, I am almost completely behind the deal, but I am waiting until February to see how it works.

Over the last few years One Star's have been kind of put on the back burner. It's always been Chucks, Jack Purcells, and One Stars in that order. With the revival of the slip on Vans, Converse quickly started making slip on Skid Grips, a boat shoe that hadn't been sold in the US in a good number of years. So I am really excited to see the One Stars get some love again. As you read in the release, there will also be apparel...and lots of it. The key piece of info from the release was...Target will offer One Star exclusive lifestyle and vintage inspired contemporary sportswear collections for men and women, including denim, non- denim bottoms, knits, wovens, graphic tees, sweaters, dresses, skirts and outerwear. One Star footwear includes exclusive and limited edition product for men, women and children. That pretty much sums it up for the apparel, which is the aspect I am probably most excited about.

Well I could probably talk more about this, but I am missing out on Black Friday. Oh, I almost forgot, Converse.com is having a one day sale so stop by and check it out. Thanks for coming by and enjoy the rest of the weekend.
Posted by James Martin at 8:39 AM

I'm on the fence about this...One Star does deserve better than Target. Speaking of Converse clothing we need more...

I have a pair of real one stars, and have looked at the Target ones. They're not the same. They've been cheapened down and are basically garbage. Converse is ruining a great line of shoes. But since Nike owns Converse, what do they care? I just bought 3 pairs of the real one stars off the internet, since the real ones aren't made anymore and there's no telling when they will be made again. They've been completely delisted from Converse's website.