It's Over, it's so Over! Yesterday I finished the last of my finals and I am not a college graduate. It still hasn't hit me yet and it probably won't until January when I would normally be going back. To honor this new feeling and chapter in my life I thought it would interesting for today's flashback to be a really rare shoe that most of you probably haven't seen before. For today's flash back I give you the Converse Run n' Slam 2000. No I am not talking about the shoe that Kirk Hinrich and Jameer Nelson wore recently, you know I could never find those anywhere.

I know very little about these shoes and I don't even remember where I found these pictures. What I do know is that these were never released, or at least in wide distribution. They do feature React II in heel, which is always nice. Missing however is the CONS, instead the whole name of Converse is used on the tongue and the stabilizing strap. Both have the line through the upper of the font just like when CONS was used. 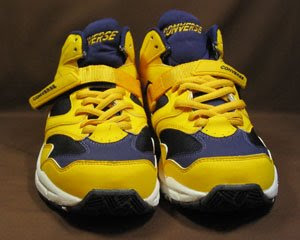 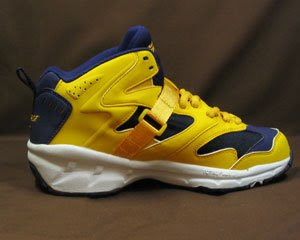 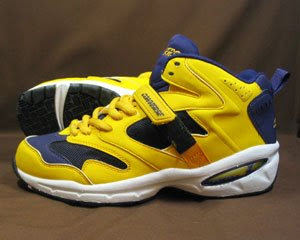 My guess is that these are just a sample pair. However it would have been interesting to see what would have happened. Either way I hope you enjoyed something a little different today. Thanks for checking out the site, and come back often.
Posted by James Martin at 10:35 AM

Congrads Jimmy and those are hot I have the Kevin J when he wore.

Impressive work, way to rep the chucks, you got great posts. Compliments aside; would you please tell me about Grandmama's Aero Jams? Is that the shoe Larry Johnson wore in his rookie year, 1991-92. I'm trying to identify an alleged PE and am having a tough time. I'd appreciate your thoughts.

~Haven't updated that in a while