What a crazy week. I was all set to post the big post I've been talking about on Wednesday and then my Mother got sick and since I hadn't called to sub that day I told my Dad that I'd take care of her so he didn't have to take a day off of work. The only problem was in the all the excitement I forgot to post anything let alone the larger piece. Which at this point probably appears more important and interesting than it really will be. Either way, I didn't get to post today because I had to watch High School Musical 2: 3 times today...aka I subbed for the choir teacher. Tonight we're doing our Halloween alternative festival at Church which goes from 5:30 to 8:00 then we have to break everything down which takes another 2 hours. And as it turns out I am going out of town tomorrow to Bowling Green so I am gonna have to post something early. Which means I'll be putting off the larger post until next week. I offer you all my apologizes for a rather lack luster week here at The Converse Blog.

Below is a picture from last night's game between Atlanta and Orlando. Acie Law IV and Jameer Nelson are pictured below. Nelson, who according to Converse.com isn't a current member of their NBA roster is wearing the new Converse Assist. Acie Law IV on the other hand is wearing the Converse Attack, a shoe that came out last year that I only saw in a Champs Sports and no where online...in America. Lovely... and don't even get me started about the Heat game last night. 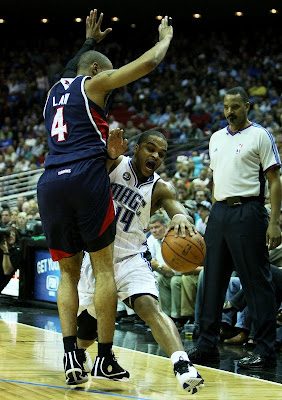 It also turns out that The Last Dragon will be getting a remake with Samuel L. Jackson will star as Sho'Nuff the Sho Gun of Harlem. I am very excited about this, but only if they keep the line, "Kiss My Converse." Arguable the most memorable line from the first movie. But I've got a bad feeling about them changing to another brand of shoes for the remake. This can't happen, but I know that the good people at Converse will be all over this to make sure that one of their iconic movie scenes isn't ruined by another brand sliding in to replace them....right?

Anyway I am out for the week, check back Monday for more Converse goodness!
Posted by James Martin at 3:50 PM