The Converse Blog: My Chucks Design Contest and Samaritan's Feet.

Friday right before I went to post the flashback, I got this email about the My Chucks design contest. The grand prize winner gets their shoe made, which is amazing. However, they also get to go to Converse HQ and work with the design team. Talk about a dream come true, I couldn't think of anything I'd like to do more. Hopefully I can get my design finalized soon, and then we'll see what happens. Here is the press release.

NORTH ANDOVER, Mass. (May 9, 2008) – Converse, with an assist from Utah Jazz star Kyle Korver, today announced the launch of MyChucks, a contest inviting participants to design a Chuck Taylor® All Star® shoe with the chance to win the ultimate prize of having their shoe produced by Converse and sold exclusively by Eastbay.

The Chuck Taylor® All Star® shoe is one of pop culture’s great blank canvases and has been worn by icons and originals spanning from music, sports, art and fashion who have been scribbling their expressions on the shoe for decades. MyChucks gives contestants the chance to bring their own creativity to the Converse canvas and showcase their design to the world.

As part of the contest, Kyle Korver submitted his own design of the Chuck Taylor All Star shoe which will be featured online, along with a video of him designing his shoe and explaining the process. Korver’s shoe features pinstripes to represent all of the people in his life, and a red stripe to represent himself and his desire to be an original. Converse will produce 226 pairs of the shoe, which pays homage to Korver’s jersey number 26, and will be donated to the Kyle Korver Foundation, whose mission is to make a positive impact on the lives of under-privileged children by improving the quality of life for disadvantaged youth and their families.

“My grandmother was an art teacher and she helped begin my interest in design at a young age. I enjoyed it so much that I majored in visual communications in college, and I’ve had a passion for art and design ever since,” said Utah Jazz forward Kyle Korver. “I’m known as a basketball player but basketball isn’t everything that defines me, and I’ve always looked for opportunities to express myself off the court. I’m very excited for the MyChucks contest because it gives people the opportunity to express themselves by using the most iconic shoe of all time.”

To enter, contestants can visit mychucks.eastbay.com to download the entry kit which contains a silhouette of the Chuck Taylor All Star shoe and contest instructions. Participants need to submit a scanned image of their design and a 20-30 second video explaining their entry. Submissions will be placed in an online, public gallery where visitors can vote on each design. Visitors to the website can also register for a chance to win a new pair of Chuck Taylor All Star shoes every day between April 28 and July 6.

The top five designs with the most votes will enter the final round of judging which is determined by the total number of votes, and the judging of artistic ability, creative expression and overall design by a panel from Converse and Eastbay. The Grand Prize will be announced on or about July 11, 2008 on mychucks.eastbay.com. The winner will be flown to Converse headquarters to work with designers and developers and create the final version of the shoe, which will be produced and sold on Eastbay.com beginning in January 2009. To be eligible for the MyChucks contests, participants must be at least 18 years of age, a U.S. resident and enter their design by June 8, 2008. 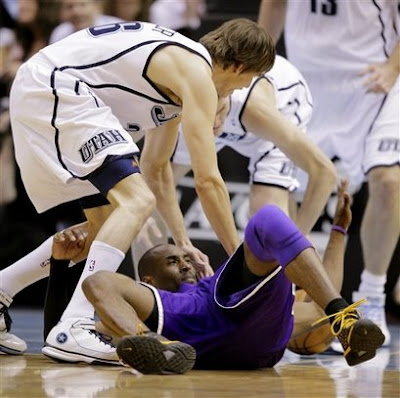 Above is a shot of Kyle Korver from yesterday's game rocking the Converse Hops. Kyle's kicks made another appearance on TNT last night. Converse continued to support the Samaritan's Feet effort, along with Adidas, Nike, and Protege. The showed some up coming shoes from the brands, and for the first time publicly Converse showed off the new 0100 design. I tried to capture a picture of them, but it didn't work. So check out the video on NBA.com.

Also please check out Samaritan's Feet and make a donation today. Every day more than 300,000,000 kids wake up without shoes. Something I take for granted ever day, is out of the reach for so many. I made a donation in my Mother's name as a Mother's Day gift. Thank you for checking out the blog. I'll be back tomorrow for a special Tuesday edition of the Converse Blog.