Misleading...perhaps...interesting...for sure.  Okay, so it's been a long week at school so I though I'd take a lighter tone for Friday's post.  Here a few pics I got from Yahoo.com of LeBron's  Bike-a-Thon.  Now I am not exactly sure what LeBron is doing, but LeBron Jr. seems to be having a ball.  That probably has a lot do with the fact that he's wearing some high top Chucks.  You can see them much better in the second picture.  So maybe someday when LeBron Jr. is old enough to hoop for cash, he can take the court in the Star and Chevron of Converse. 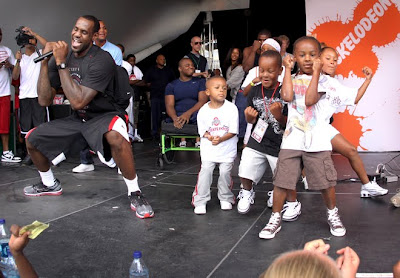 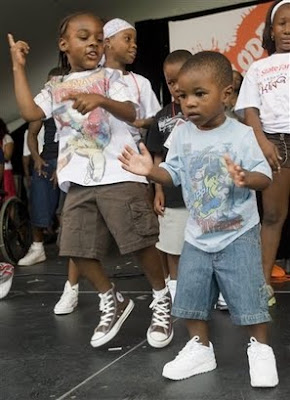 Who knows, maybe Nike has realized that LeBron's line won't ever justify the amount of money they signed him for.  So maybe they're making plans to have LeBron be the face of Converse and are using LeBron Jr. to help introduce the idea.  Okay, all joking aside, I still think it's pretty cool to see him in some Chucks.  Thanks for following the Converse Blog, don't forget we're that we're on Twitter so follow us already.  @TheConverseBlog.
Posted by James Martin at 7:10 AM

Pretty cool vibe we have going here, keep it going =]